Poll Pressure - as simple as we think?

Of course, the answer is NO! Once you start to learn the real science, nothing is simple!

I asked a question on my page yesterday, between these 3 options, which applies the most poll pressure? The answers were really carefully thought out and considered. Which gives me hope that people really want to understand the mechanics of their equipment. Not just using a bit of gear because they’ve been told it’s a good idea.

It was a bit of a mean question because the answer is NOT what you think. And you can do this test at home on your own horses (if you have these bits).

The dutch ‘gag’ isn’t a gag at all. It’s actually a fairly badly designed, extremely popular bit. Many modern bit companies are no longer even making them.

Primarily it works from what we could assume is leverage force (with the reins on the second or third ring down). Now, this is all well and good until you pull on the reins. You might see that the dutch ‘gag’ is a loose ring style bit, thus it does NOT have a fixed *fulcrum. This means that the centre ring will slide around until the rein is level with the mouthpiece. Thus really losing any leverage action.

If you remember last week’s question about Baucher snaffles, you will remember this:

Any bit where the cheekpiece is attached ABOVE the rein ring has an ANTICLOCKWISE action. This means the bit rotates in such a way that it applies more pressure to the lips than to the lower jaw. SO, the dutch ‘gag’ is not suitable for horses who lift their heads, as they would need more tongue/bar pressure rather than lip pressure (which elevates the head), the reason it works to slow horses down is very complex, suitable for its own post. It does apply an amount of poll pressure, not as much as expected due to compression of mouth tissue. 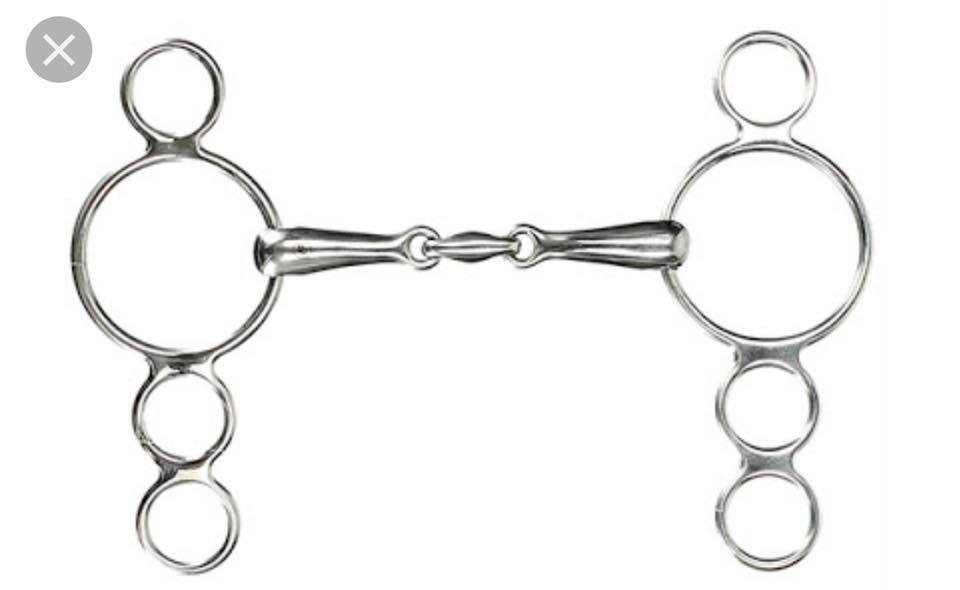 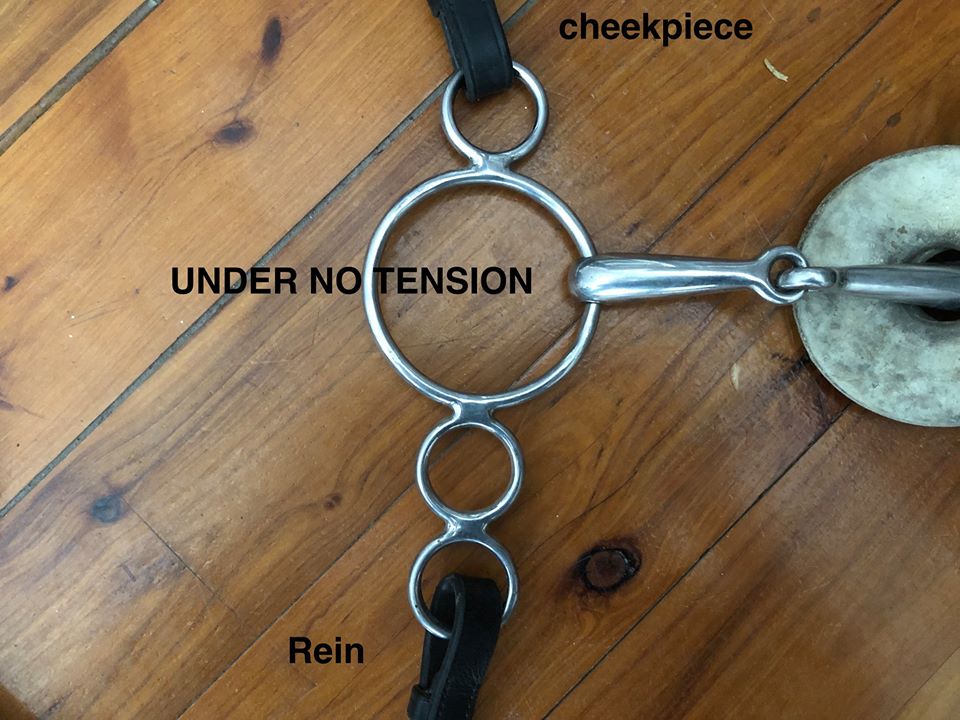 Dutch Gag under no tension

Yes, the NOSEBAND can apply an awful lot of poll pressure IF it’s done up tightly. What’s more is that unlike bits, the poll pressure of the noseband is unrelenting. This is why I’m forever hounding people to loosen their nosebands. And why tight crank nosebands make me cry. Do your own test. Next time you do up your noseband, put a couple of fingers under the crown piece of the bridle, then pull the noseband together. It gets worse; THEN put the flash strap on. The conical shape of the horses head means that when the noseband is firm, it naturally wants to pull forward, thus causing poll pressure. The addition of a flash strap makes it pull even further forward. A study done in Ireland was performed using a pressure sensor under the crown piece. It showed a pressure of 32N (3.2kg) was applied with a firmly fitted Hanoverian/flash combination with 1 finger of space. When the combination was tight (no fingers space) the pressure was around 10kg!!! This would vary depending on the shape of the horse’s head too. This is similar to some bits, depending on rein pressure being used, but the horse gets no rest from it.

The first way to avoid this is to not over tighten your noseband, you want AT LEAST 2 fingers between the horse and the noseband.

The second is to invest in a newer style bridle where the noseband is attached to the main crown piece. Not the traditional style where it goes underneath the crown piece. This helps disperse any poll pressure over a wider band, thus making things a little more comfortable. The anatomical bridles coming onto the market nowadays are taking this issue more into consideration in their design. 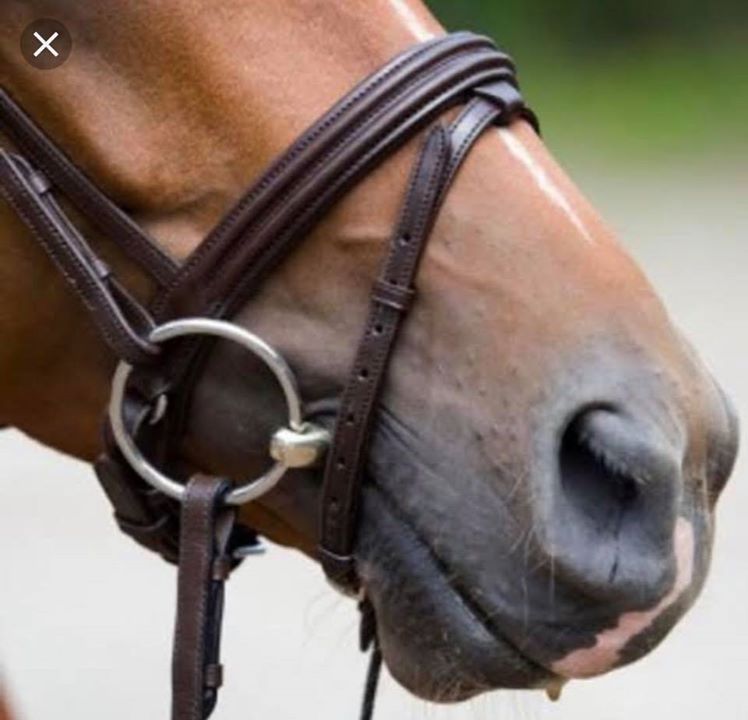 OK, so this bit has ALOT going on. I won’t go into everything, but I will go into why this one is often misunderstood as applying a lot of poll pressure.

There have been a number of studies done showing the effects of these style of bits.

The first thing we know is that even though the bit has a fixed fulcrum (mouthpiece cannot slide on a ring), it cannot work as such due to the horse’s dynamic mouth tissue. The lip and tissues compress, which translates the bit back to the rider, which brings it closer to the poll. In a rein tension study done (with curb bits) by Mrs Jane Bartle-Wilson, the results clearly show poll pressure is FAR less than was predicted. 2 kg of rein pressure yielded 600g of poll compression. As the rein tension became greater, the poll compression did not increase.

Even amongst the experts, there are still arguments going on! Several different schools of thought on multiple bits. This is ALL the information I have read thus far and what I have learned. Should I learn something that contradicts what I have written, rest assured, I will let you know. All very interesting if not a bit complex!!!

My aim is to ‘myth bust’ as much as possible and ensures riders understand how these things work. We owe it to our horses to do the (correct) research. Much of what you will read on the internet is based on the expectations of a bit, not actually the science behind the dynamics of a horse’s mouth tissue. Be careful what you take as gospel.

*Fulcrum- the point at which a lever is placed to get purchase, or on which it turns or is supported.

Anna’s expertise in bit fitting is unparalleled in Australia. I would highly recommend her to anyone from high performance riders to pleasure riders. She’ll help you and your horse find exactly what fits for your partnership!

Don't know where to start?